5 Reasons Why Collaboration Is Replacing Email

Email is the Killer App

Let me start by stating that I love email and don’t think I could work without it. I’ve always said I believe email is the killer app (so I’ve been able to tick that box on my “Discovery To-Do List”). I type fast and am able to get through a large number in a day. But it doesn’t change the fact that I’m drowning in email. Here’s proof: 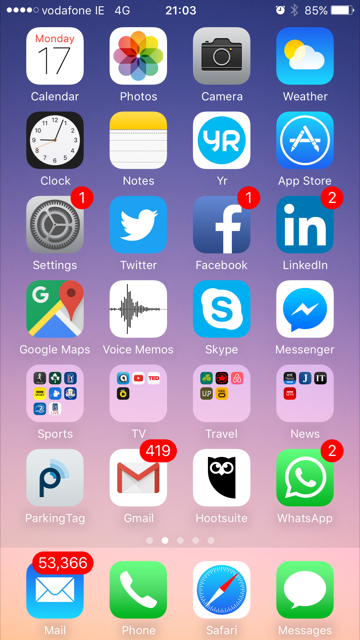 Last Friday I received 87 emails. It’s the middle of summer and things are pretty slow. In fact, I probably get fewer emails on a Friday than any other day of the week. When I go on 5 days holiday later this summer I expect to have 1,000 emails in my inbox when I get back – it’s nuts.

(Before you ask, yes I’ve broken out my inboxes – promotional, social, updates, etc. – turned off most updates and unsubscribed from a tonne of lists. But even that takes time every week because organisations are data mining and sending me more and more stuff.)

This is the number one reason I like using collaboration tools. I can save a tonne of time on a large number of tasks that involve teams and groups of people. I don’t much mind which tool it is (Jira, Hubspot, Teamwork, etc.); what’s important is that it works for the others on the team who need to complete tasks and monitor their progress.

Let’s talk about video. I personally save more than 50% of my time reviewing video on a collaboration platform rather than using email and a variety of consumer apps like WeTransfer and Dropbox. And though I must admit that I don’t work with video all the time, when I do life is made a lot easier using a collaboration tool. The comments I make and the video are married together in one place and I am always able to see what I and the rest of the team are talking about with timecoded comments.

I once worked for a semi-state organisation where I would email one person a question and the response from that person could be CC’ed to as many as 20 people – many of whom I had never met. I never knew whether I was supposed to “reply to all” when responding or simply reply to the one person.

Work is far more agile using collaboration software. Instead of having to write an email to one person and CC a number of others, I can (and am comfortable) simply writing a comment and getting others to comment on it. When this happens in a workflow, email is used far more as a notification centre and I can eliminate long email chains.

3. Review and clarification is better

The reason we all get so many emails is because we have a large number of tasks on the go at once. For those that need review and approve various tasks with more than one person, I tend to use collaboration software. For those that don’t I use email.

Not all tasks need to be collaborated on. For example – I work with an accountant on my taxes. He’s just one person. We have a one-on-one work relationship and we use email to share documents. End of story.

But when I work on reviewing a video there is always a need to make comments and relate those to a specific time within that video. If I used email for this (and I used to) then I would need to find and write down the timecode. Then when I send that email to others who are reviewing the same video, they need to make the effort to relate that comment to the exact moment in the video that I am talking about. Only at that point is there true clarification in everyone’s mind as to what I am talking about. Using a video collaboration platform instantly remedies this.

Perhaps the most liberating of all the benefits is trust and transparency – but it is not for everyone.

The only way you can get true collaboration on a team is if the team lead uses the platform. And then, like working with any boss, there is the inevitable challenge of everyone saying the right thing. There are those that can do it, those that struggle and those that simply don’t do it.

I’ve found that getting people to sign up to using the collaboration software is often the biggest challenge of all. Some of those who are initially reluctant are often said to be too busy, or struggle from inertia, or complain they use too many platforms already. But the reality is, if you can save 50% of your time working on something and get better results, then those excuses are bogus.

Very often the reason people don’t use collaboration software is that they struggle working with others – both senior and junior – who can see what they are doing. They are the ones that don’t respond to email promptly, who rarely comment during meetings and who often aren’t good at collaborating in the first place.

But for those that do use collaboration platforms the results can be immense. For example – take an approval process for a video ad. Any 30 second video ad can go through numerous approvals. If you use collaboration software during this process then you make those who are participating justify the comments they are making.

One way I have found to get the most out of a team is to ask a question rather than make a comment. Like “What do you think about the background music?” Rather than passing judgement, it helps to focus the minds of all those involved – many of whom have different skillsets – and you inevitably end up with insights that are unexpected.

5. Search is easier and more efficient

Email is a closed system and you can only ever search your own content. Bottlenecks happen in organisations and workflows when there is a lack of transparency and email by definition does this. If you only use email, how often does it happen that you think you have said something to someone when in fact you have only mentioned it to others?

By making things searchable for all, you inevitably reduce the amount of times that you have to repeat yourself and you should speed up processes along the way as everyone can get facts they need as and when they want them.

There is a famous quote that has been attributed to a number of CEOs of large organisations that goes: “If we only knew what we know”. It’s a great line and is just as relevant to a large organisation as it is to a team as it is to the creation of a piece of media like a video ad. If we knew what all the stakeholders were thinking right from the beginning, it would make creating that video, managing it through production and post-production, and archiving it so much easier.