5 Cloud Solutions to help you manage your video better 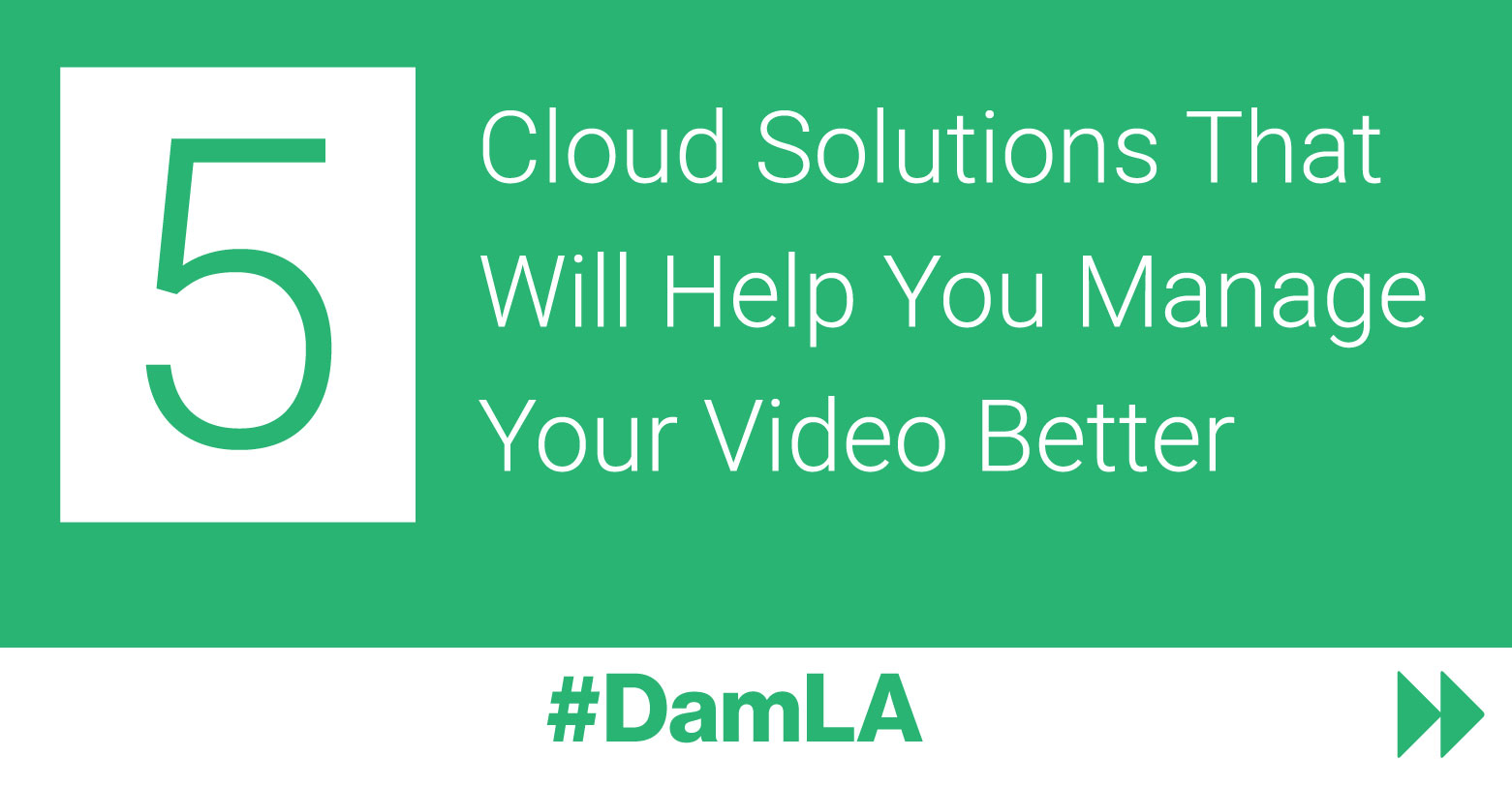 As the Digital Asset Management Los Angeles conference gets underway this week (#damla) there will be plenty of chatter about the best ways to organise digital content. And there will be an increasing focus on video and Cloud Solutions.

The video ecosystem is growing – fast.

Big data is giving way to big video. By 2020 more than 80% of all internet traffic will be video. And the amount of video produced is growing by more than 30% per year.

So you would think with everyone talking about the golden age of TV that Hollywood and the Studios are expanding at breakneck speed. So why don’t we read about zillions of people rushing to California to join the video revolution?

Because it is not all happening in Hollywood. Sure, the main studios and big names are making more content, but the real revolution is happening down the street and around the corner.

The real revolution is among the New Generation of broadcasters – enterprises. Businesses are now making more video in a day than Hollywood creates in a year. And it’s growing exponentially.

The amazing is – they are doing it without all the systems and machinery that traditional broadcasters use. Despite not having access to vast resources of a Studio, they are turning out content at a rapid rate. And the reason they make more content than Hollywood is that there are simply more of them – millions of business create video content whereas there are only a handful of Hollywood studios.

And they are redefining workflows. Because they are making do with a fraction of the budget and a fraction of the skillset; they are changing many of the traditional production and post-production techniques. They are driving change. And they are finding new and imaginative ways to create content and reduce the roadblocks that hamper quick and efficient video content creation.

The most obvious change has been the migration to cloud technologies.

Cloud solutions allow the New Generation of broadcasters to scale and integrate technologies and services without having to leave the comfort of their desks.

Rather than thinking: “Imagine how much more content we could make if we had access to the traditional broadcaster technologies”, they are demonstrating that they can cut production time and costs and still produce quality content by doing it differently.

However, some things are not getting easier. One of the big challenges for enterprises is managing the video assets. At the International Broadcast Conference in Amsterdam last month, 55,000 engineers gathered to look at the latest broadcast equipment. Much of the show was dedicated to asset management, playout and distribution – 3 workflows that are soon to migrate to the cloud. In fact, a recent bit of research that came out of IBC said that 85% of broadcasters expect to migrate various workflows to the cloud within the next 3 years.

The consequence is that the main cloud providers – dominated by Amazon Web Services, Google Cloud Network, Microsoft Azure and IBM Bluemix – have begun developing media services to facilitate the migration of workflows. This news has come as a relief to the vast number of enterprises that have been looking for more streamlined solutions around video management.

Once the reserve of the editors and producers, collaboration, review and approvals has taken on a whole new workflow all its own. The problem is, traditional broadcasters have never catered for collaboration outside the edit suite. If you wanted to see what was happening, you’d need to knock on the editor’s door and if he were in the mood, he might show you where he was.

Editors, like all creatives, could be sensitive about their content – wanting to wait for a finished product before showing it off. The impact would be more powerful. And they could better show off their creative abilities.

Today though, it’s more about the message and that message is part of a conversation. Miss your chance to join in the conversation and you could miss out altogether. So rather than hamper a process with an all or nothing reveal, the production process has become far more collaborative.

And it can involve several stakeholders at once – from editor and producer to client services, sponsor, legal and even the C-Suite. By involving everyone at once – rather than lining them up in a linear workflow – can reduce production times by 75-80% as review and approvals have traditionally been the slowest part of the production process.

To some who have worked in television and film, search is an anomaly. Something the person in library services does. Or something that was promised 20 years ago and never materialised.

When I started my career at the BBC, there were 3 places I could find video tapes: the library, the editor’s suite, or underneath the desk of a producer. If it wasn’t there, it could be anywhere.

Now cloud storage allows anyone to search for content at any time. Not only that, the advances in artificial intelligence mean that you no longer have to have a person stuck in a cupboard somewhere shortlisting and adding metadata. This can all be generated dynamically just as can the subtitles be added at the push of a button.

Even a short video used to take a vast amount of coordination and manpower. Again, when I started my career at the BBC, we would send 5 people out to get a clip of a politician – the reporter, producer, camera guy, sound guy and lighting guy. Not to mention the 2 taxi drivers because we couldn’t get everyone and the gear in one cab.

Thankfully that has all changed. But still, there are silos around project management that need modernising. Keeping all documentation in one place is a start. Traditionally media asset management platforms like Avid or Adobe did not cater for word docs, PDFs or Powerpoint presentations. They still don’t. Recently, we have created solutions that allow video creators to associate their video content with the rights management and work files that are associated with the project. It only makes sense as many of those documents are searchable and add to the metadata of the video.

An hour’s worth of raw content shot in HD could be as much as 200GB – or more content than I can store on my laptop. The NHL is now shooting in Super High Definition – about 1TB per game – and wants to move to 4k by the workflow doesn’t exist to allow it all to be stored.

That said, we are getting better at storage and that means accessing cloud solutions that provide a near line facility for easy access for a limited period of time. We can then move them automatically into an infrequent access bucket and finally into the archive.

What we’ve learned over the past few years as enterprise has developed more and more video is that certain bits of content can be used multiple times over a short period of time. The reuse of content makes the making of it more economical reduces the overall cost of production.

While the need to collaborate increases, the need to share does as well. As more and more content is created in organisations, distributing the message throughout our organisations becomes essential.

As Jack Welsh once famously said, “If only we knew what we know”. He was, of course, referring to the fact that within an organisation as vast as GE, it is difficult to know what everyone is doing.
There is a lot of work that ends up getting repeated from one division to the next simply because internal communications is so difficult.

In a way, sharing ties in the other 4 workflows mentioned above. By collaborating centrally, allowing access for all to storage, making search universal and associating like documents together, organisations that create video using cloud solutions and collaboration tools are redefining the video workflow.