Why Use 360 Degree Images

When executed well, 360 degree images are a great way of demonstrating your company’s practical wisdom, and making the customer feeling better equipped to make a purchasing decision. If you’re a Tour Guide, you could embed a 360 degree image of the Eiffel Tower. If you’re a realtor, you can get more enquiries by shooting great 360 degree images of your properties. If you’re trying to make your brand more friendly and attractive, post to Facebook an image of your staff behind the scenes at your business.

There’s a good chance you already own this – you can take 360 degree photos by using Panoramic Mode on any iPhone since the 5s running iOS8, or pretty much any Android phone since 2013. Must be running Android 4.4 or newer.

If you’re an agency and need to take super professional shots, there are a bunch of dedicated 360 degree cameras on the market. Check out the Samsung Gear 360 (about €200) or the 360 Cam from Giroptic (more expensive, but shoots in 4k)

If you don’t mind looking dramatically uncool, you can take 360 degree photos with your iPad.

Where will 360 degree images display?

It’s easier to list where your 360 degree images won’t display – iOS 7 and before, Android 4.3 and before, and Internet Explorer. Keep in mind that many C-suite execs and marketing personas with budget authority will be using older phones and now-defunct browsers, and marketing spend on those personas might be better used elsewhere.

You can post a 360 degree image to Facebook Just start a new post, and upload the photo as normal – Facebook will turn any image wider than 130 degrees into a 360 degrees image. You’ll know it’s worked if you can see Facebook’s “Globe” icon in the bottom right corner (see illustration below.)

The number of cameras that shoot in 360 Degree is growing exponentially, but here are some solid choices:

The Samsung Gear 360
Samsung’s Gear 360 updates annually, so it might be worth waiting until the latest iteration. Unfortunately, sometimes the biggest change is in the price. It shoots in 4k, looks great, but has a max frame rate of 24fps – not great for anything above pro-sumer level. 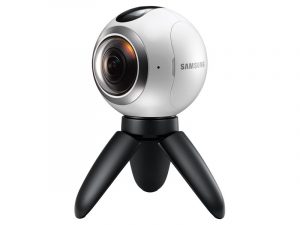 At $229, the Gear 360 is a decent entry-level option, but not for the professional studio. You’ll also find it cheaper than the official price tag if you shop around, such as the link to Amazon below.

The Theta 360 makes it really easy to upload its 360 degree videos to Facebook, and relatively easy to YouTube. On the downside, there’s only 8GB of storage and no way to add external memory. 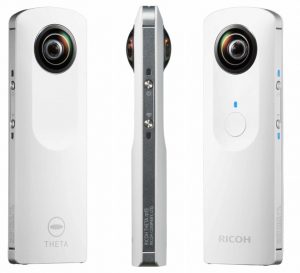 Best Buy: 360Fly 4K
Shoots in 4k, which is great, and the accompanying app is solid. You also get a tripod mount, a whopping 64GB of storage and a really simple interface. 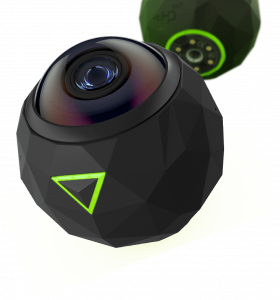 Here’s a great review of the 360fly 4K from TechCrunch:

360 degree video doesn’t display everywhere, but unless you still have a really old iPhone or are using Internet Explorer you should have no problem viewing it.

360 degree video on Facebook only displays on modern browsers. IE users will see an empty square where the video should be.

Here’s a list of all the devices that will display 360 degree video:

Unlike regular images, 360 degree images don’t display everywhere. They show only on newer smartphones and on modern browsers.

Now the technical jargon – if this stuff is hieroglyphics to you, don’t panic. Any of the devices above will do this automatically (or your could let Overcast encode it automatically for you).

And that’s it! To learn more about working with emerging video formats, check out some of our other guides:

Digital Asset Management: How To Choose A Dam

5 Reasons Why Collaboration Is Replacing Email